The birth of French ethnology. The first ethnographic missions to Africa 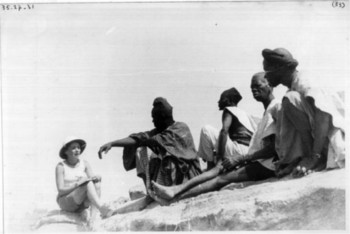 The first ethnographic missions to Africa marked in France the beginnings of field ethnology and the birth of the discipline. These events, the actors on these missions, and the historical context will appear first on this portal. The introductory texts will be accompanied by maps and illustrated by collections of iconographic archival documents. The first set is for a wide audience interested by the subject. For a more scholarly use, the different sources of information on these missions (archival collections, photographs, fieldwork artifacts) will be localized, indicated, and described. An inventory will be taken of the publications from these different missions and, whenever possible, made available in their entirety.
The three partners are the Quai Branly Museum, the BnF, and the project lead, the Laboratory of Ethnology and Comparative Sociology (CNRS, UPO). The complementarity of the archival, documentary, and museum resources conserved in the three institutions, especially concerning the Dakar-Djibouti Mission, and the promotional experiences make this collaboration both natural and necessarily fruitful.
With its focus on questions of promotion, online publishing, and restitution, this portal especially seeks an alternative solution to the systematic and complete putting online of fieldwork data, once it is digitized, which would infringe on the rights of the ethnographers and their subjects. The collections will consist of documents carefully and ethically selected. Some of them will be made available to a photo sharing site, such as Flickr, for a wider distribution and commentary. We wish to encourage and collect reactions from scholars, artists, and from the more general public, especially from the countries originally studied by those missions. The portal will thus allow for experimentation with a mode of promotion and restitution of “sensitive” archives while respecting ethical principles, in collaboration with several audiences.

Sophie Blanchy is doing research in Comoros archipelago and in Madagascar Island. She studied and valued Henri Pobéguin’s photographic collection, which was constituted in the Comoros in 1897 (glass plates, Library of St Maur des Fossés, digitized in MAE, available exhibition, published book). She used these well captioned photos in her ethnographical inquiries (on line publication). She also studied the archives of Lars Vig, Lutheran Norwegian missionary and ethnographer who lived in Madagascar at the end of the XIXè century. His archives concern the practices and the religious representations (published papers).

Marie-Dominique Mouton is head of the Éric-de-Dampierre Library. In this context, she has implemented a policy for collecting, safeguarding and developing the ethnologists’ archives. She encourages reflection on the methodological and ethical questions raised by the use and re-use of field materials. Her professional areas of interest also include: the evolution of research libraries, the development of documentary resources in anthropology, the history of Africanist documentation. She is co-founder of the Ethnology Network and the Réseau des Archives des ethnologues (Network of Ethnologists’ Archives), now labelled a Consortium in the context of Corpus IR. She served as an expert advisor to the Ministry of Foreign Affairs during its implementation of a cooperative of Anglophone and Francophone libraries in West and Central Africa.