Back to publications
scientific articles 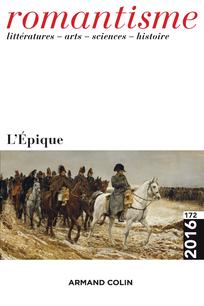 Can sculpture be qualified as “epic” ? Not Calliope’s statues but the attempts to reconstitute Achilles’ shield, according to ekphrasis' founding Homeric figure, provide us at the beginning of the 19th century with our first examples of confrontation between epic and sculpture. Romanticism, which found a sculptural form somewhat after its form in the other arts, renewed the expression of the epic through the development of colossal statues, vectors of the memory of heroism, but also through work in relief. Is this other sculptural mode better suited to the expression of drama or does it preserve a specifically epic power ? The question, linked to the same issues as literary Romanticism, takes on its full meaning with the evolution of sculpture during the 19th century.