30th anniversary of the March for Equality and Against Racism 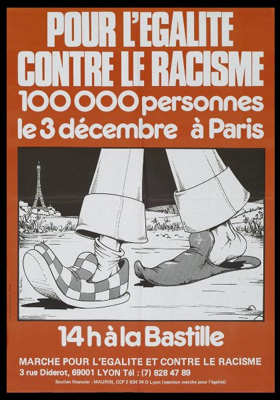 30th anniversary of the March for Equality and Against Racism: transmissions and appropriations of history by immigrant activists

The 30th anniversary of the March for Equality and Against Racism (October 15 – December 3, 1983) will be the occasion for multiple public commemorations, conferences, scholarly and insider publications, and television documentaries. Numerous individual and collective actors will produce a set of discourses and social practices aiming to re-appropriate this important event for the history of immigrant and anti-racist demonstrations.
By analyzing the role of immigrant activist actors in the writing and re-appropriate of their past, this project sits squarely within the cluster’s central thematic research on social re-appropriations of the past.